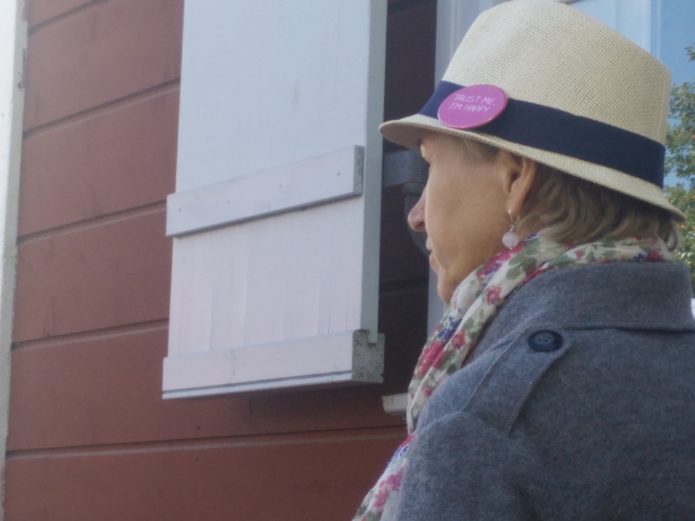 Aarhus is a Very Fine House: Why be Nordic?

Why do so many countries want to be like Nordic countries? Are they really as “happy” as they seem? Can Estonia ever be a Nordic country? These were some of the questions considered by the panel at the Opinion Festival’s talk, ‘How Strong Are the Nordic Countries? Strong Enough to Be Happy?!’ (punctuation as written in the brochure) which took place on Friday afternoon and was organised in association with the Norden Nordic Council of Ministers.

Helen Russell is a freelance journalist whose book, Living Danishly, describes the many social and cultural adaptations that have to be made by a British immigrant to the place ranked by the United Nations as the happiest in the world. Moderator Villu Arak asked why there was such an appetite in Denmark for dark, noirish crime fiction. Russell replied that it was possibly because life was comfortable enough to want to read or see a struggle. “There’s definitely something to be said for taking things for granted.” She then turned to the topic of what makes Denmark special to international workers.

“I speak to a lot of businesses who are trying to attract more international talent. The kind of international talent that would be drawn to Scandinavia are the more liberal people on the left, who don’t mind paying such high taxes. What’s special about Scandinavia is this welfare state, is this equality. It’s about recognising that, and preserving it a bit more, and not taking it for granted, whilst also trying to celebrate diversity. In a typically-homogeneous country such as Denmark, and also Norway and Sweden, it’s about trying to welcome in new people, and realising that could be a good thing.”

Joar Vitterso is a Psychology professor from the University of Tromso in Norway. He cautioned against expecting all nations to join a neoliberal consensus based on the European austerity-driven model. What he said could be considered a message to Estonia, seen by some as a kind of test-bed for Friedman School economics. “I’m very sceptical when people say the development forces us to replace something that is working well with something that is working not so well. Why is that? Why should we accept that development means pensions go down, that unhealthy [unwell] people don’t get the treatment they used to get?”

“The next generation is the first for hundreds of years that has fewer prospects than their parents had. Why must we accept that this has to happen because of development? For me, development is something that gets better, and I can’t accept these people who say ‘this can’t go on because so and so.'”

Third panellist Bengt Lindroth, a Swedish author and musician, was concerned that Sweden look now at the kind of society it wants in the future. This is a country whose most famous modern citizen is footballer Zlatan Ibrahimovic, who came to the country with his Bosnian/Croatian family as a youngster, and it could be argued ‘Ibra’ has changed forever the perception of a Swede. “Sweden is, I think, the only country with a paragraph in its constitution saying the country should aim to become a multicultural society. We need to think what that means, today, in practice, and what policies should be enacted. That is a very important question for Sweden to handle today.”

Vitterso voiced his hopes for the future of the Nordic nations and their neighbours. “I like utopias, because they’re irresponsible, and just throw out ideas and say, ‘hey, isn’t this a good way of living?’ I hope in ten years we will talk more about things that matter, like good lives and good societies. I hope we will have developed a better way of talking about what we want, and not just measuring it in terms of economies, but what we really want our kids to experience in this society. I hope that governments will take the pursuit of a good life seriously enough to discuss it every day.”

Russell said she was happy to see sustainability taught in Danish schools. “Aarhus is the European Capital of Culture next year, and they’re running a campaign about sustainability in childcare and schools and what a difference that could make. However, she noticed that although Denmark is commonly felt to be such a contented nation, there were many users of antidepressants – Denmark is felt by some measures to be among the highest users of ‘happy pills’ in the world.

“I thought, ‘how can you be the happiest nation, with such high antidepressant use?’ I have spoken to many Danes about this, and I think because they expect Arbejdsglæde, which means happiness at work; if they’re not getting it, they do something about it. There’s a lot of stress leave, and doctors are very receptive, if someone says they’re not feeling great, antidepressants are handed out fairly liberally, from my experience in my research. In the UK and US there’s a culture of soldiering on, for fear that any admission of weakness will impact negatively on your career.”

Although there seems a darkness below the Danish facade of complete contentment, it could be said that the high rates of cancer in the country were, in some way, due to happiness, according to Russell. “Danes are libertarians, they love to eat pork, eat ice cream and smoke – sometimes all at the same time. All around me I see people having a hoot – perhaps not looking so good, but knowing the system is there to help them.”

The last word went to Estonia’s Swedish Ambassador, Anders Ljunggren, who was in the audience. He had an opinion on one of the most popular questions of the day, why some countries are considered ‘Nordic’ and others  are not. His words may not go down well with Estonians. “Being here in Estonia, I should say that Finland was successful, they made very big sacrifices, they kept their freedom during the Second World War, they had the ability to choose to be a Nordic country, and they were welcomed.”

“That’s also the situation today. You have to wish to be a Nordic country, you have to fulfil some criteria, with geography and so on, and you have to be welcomed. The political construction [of Norden] is not forever – it depends on the will of the people in Norden and the neighbouring countries.” It could be said that Estonia has already made more than enough sacrifices. Maybe now is the time for some international recognition of them.